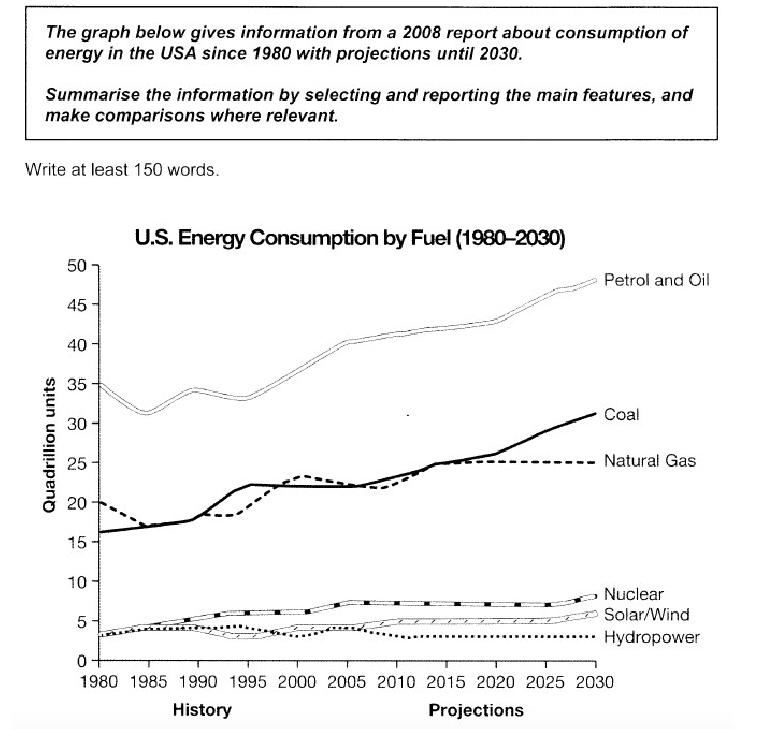 【Task 1 Topic】
The graph below gives information from a 2008 report about consumption of energy in the USA since 1980 with a projections until 2030.

Summarise the information by selecting and reporting the main features, and make comparisons where relevant.

This graph chart illustrates the variations of six sorts of energy, namely petrol and oil, coal, natural gas, nuclear, solar/wind and hydropower, which used in America from 1980 and makes a prediction (What is the subject of  this? Energy sources cannot make predictions!)  until 2030.In general, the consumption of petrol and oil topped the chart from 1980, and it will be remained the largest group in 2030, according to the projection of this graph.

The quadrillion units of petrol and oil was 35 from 1980, and after 2005, the consumption was steadily increased steadily. In 2030, the use of fuels will reach 50 quadrillion units. The consumption of coal and natural gas was slightly fluctuated slightly from 1980 to 2010, then which reveled a continuous ascension(not clear)  after 2015, while natural gas used to (?) keep the same proportion.

The use of nuclear, solar/wind and hydropower was were merely about 4 quadrillion units from 1980. After 1985, the use of nuclear power demonstrated a slightly riese to approximately 7 quadrillion units, it will be projected to remain the same proportion in 2025. From this graph, the consumption of nuclear, solar/wind and hydropower were the least important which with each proportion reported to will be 7,5 and 3 respectively in 2030.